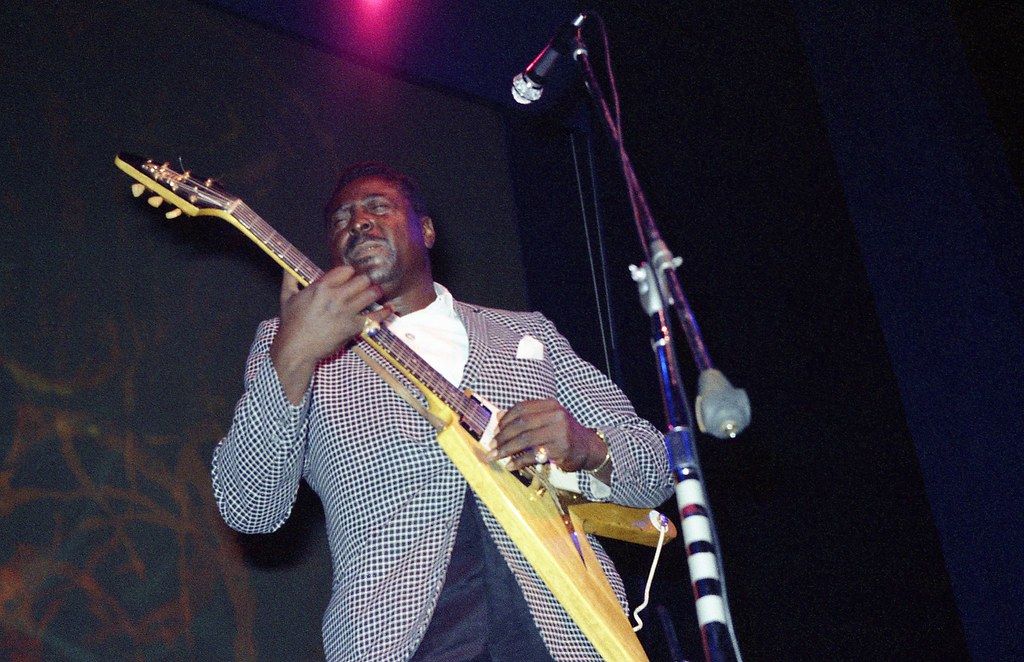 King Albert plays the blues. One of the three Kings of the Blues. For more of his music, select the image.

Albert King is featured performing his signature tune “I’ll Play The Blues For You” during a live performance in the early 70s.

The 1970s saw King teamed with members of The Bar-Kays and The Movement (Isaac Hayes’s backing group), including bassist James Alexander and drummer Willie Hall adding strong funk elements to his music. With the addition of multiple rhythm guitarists, producers Allen Jones and Henry Bush created a wall of sound in contrast with the sparse, punchy records that King made with Booker T. & the MGs.

Beginning of the Blues

He was born on a cotton plantation in Indianola, Mississippi. During his childhood he would sing at a church with a family gospel group, in which his father played the guitar. One of 13 children, King grew up picking cotton on plantations near Forrest City, Arkansas, where the family moved when he was eight.

King was famed for his powerful string-bending style as well as for his soulful, smoky vocals. King often said he was born in Indianola and was a half-brother of B.B. King, although the scant surviving official documentation suggests otherwise on both counts. King carved his own indelible niche in the blues hierarchy by creating a deep, dramatic sound that was widely imitated by both blues and rock guitarists.

King’s readily identifiable style made him one of the most important artists in the history of the blues, but his own identity was a longtime source of confusion.

In interviews he said he was born in Indianola on April 25, 1923 (or 1924), and whenever he performed at Club Ebony in Indianola, the event was celebrated as a homecoming. He often claimed to be a half-brother of another Indianola native, B.B. King, citing the fact that B.B.’s father was named Albert King. But when he applied for a Social Security card in 1942, he gave his birthplace as “Aboden” (most likely Aberdeen), Mississippi, and signed his name as Albert Nelson, listing his father as Will Nelson. Musicians also knew him as Albert Nelson in the 1940s and ’50s. But when he made his first record in 1953 – when B.B. had become a national blues star – Albert Nelson became Albert King, and by 1959 he was billed in newspaper ads as “B.B. King’s brother.” He also sometimes used the same nickname as B.B. – “Blues Boy” – and named his guitar Lucy (B.B.’s instrument was named Lucille). B.B., however, claimed that Albert was a friend but not a relative, and he once retorted, “My name was King before I was famous.”

According to King, he was five when his father left the family and eight when he moved with his mother, Mary Blevins, and two sisters to the Forrest City, Arkansas, area. He said his family had also lived in Arcola, Mississippi, for a time. He made his first guitar out of a cigar box, a piece of a bush, and a strand of broom wire. He later bought a real guitar for $1.25. As a left-hander learning guitar on his own, he used a normal string setup and tuning, but played with his guitar reversed, “bending” strings by pulling them down, not pushing them up. King picked cotton, drove a bulldozer, worked in construction, and held other jobs until he was able to support himself as a musician.

He began his professional work as a musician with a group called the Groove Boys in Osceola, Arkansas. Moving north to Gary, Indiana, and later St. Louis, Missouri, he briefly played drums for Jimmy Reed’s band and on several early Reed recordings. He was influenced by the blues musicians Blind Lemon Jefferson and Lonnie Johnson. The electric guitar became his signature instrument, his preference being the Gibson Flying V which he named Lucy. King earned his nickname “The Velvet Bulldozer” during this period, as he drove a bulldozer and also worked as a mechanic to make a living. His smooth vocal style was influenced by R&B pop balladeers, such as the Mills Brothers.

King moved to Gary, Indiana, in the early 1950s and then to Chicago in 1953, where he cut his first single for Parrot Records. It was a minor regional success. He moved to Brooklyn, Illinois, just across the river from St. Louis, in 1956, and formed a new band. During this period, he settled on using the Flying V as his primary guitar. He resumed recording in 1959 with his first minor hit, “I’m a Lonely Man,” written by Little Milton, who was Bobbin Records A&R man, a fellow guitar hero, and responsible for King’s signing with the label.

It was not until his 1961 release “Don’t Throw Your Love on Me So Strong” that King had a major hit, reaching number fourteen on the US Billboard R&B chart. The song was included on his first album The Big Blues, released in 1962. He next signed with jazz artist Leo Gooden’s Coun-Tree label.

In 1966, King moved to Memphis, where he signed with the Stax record label. Produced by Al Jackson, Jr., King with Booker T. & the MGs recorded dozens of influential sides, such as “Crosscut Saw” and “As The Years Go Passing By”. In 1967 Stax released the album Born Under a Bad Sign, which was not technically a studio album, but a collection of all the singles King recorded at Stax. The title track of that album (written by Booker T. Jones and William Bell) became King’s best-known song and has been covered by many artists (from the British rock group Cream, Paul Rodgers, the Canadian guitarist Pat Travers, and the American rock guitarist Jimi Hendrix to the cartoon character Homer Simpson). The production of the songs was sparse, clean, and maintained a traditional blues sound while also sounding fresh and thoroughly contemporary. Almost as important as King himself was the “menacing” bass of Donald “Duck” Dunn, which at some points approached an early metal feel.

In 1969, King performed live with the St. Louis Symphony Orchestra. That same year, he released the album Years Gone By. In the early 1970s, he recorded the album Lovejoy with a group of white rock singers; an Elvis Presley tribute album, Albert King Does the King’s Things; and a cameo on an Albert Brooks’s comedy album A Star Is Bought. The above-mentioned album was a collection of Elvis’s 1950s hits reworked and re-imagined in Albert King’s musical sound, although critics felt the results were mixed. Lovejoy introduced no really new musical innovations over King’s previous two Stax albums, although it notably includes a cover of the Rolling Stones’ hit “Honky Tonk Women”.

On June 6, 1970, King joined the Doors on stage at the Pacific Coliseum in Vancouver, Canada. He lent his distinctive guitar to blues cuts such as “Little Red Rooster,” “Money,” “Rock Me” and “Who Do You Love.” Recordings of this performance were released in 2010 by Rhino records as The Doors Live in Vancouver 1970.

Like many older artists, King wanted to remain relevant and on the charts, and so he eagerly embraced the new sound of funk. King was teamed with members of the Bar-Kays and the Movement (Isaac Hayes’s backing group), including the bassist James Alexander and the drummer Willie Hall, adding strong funk elements to his music. Adding strings and multiple rhythm guitarists, producers Allen Jones and Henry Bush created a wall of sound that contrasted with the sparse, punchy records King made with Booker T. & the MGs. Among these was another of King’s signature songs, “I’ll Play the Blues for You”, in 1972. The new instrumental arrangements added a renewed freshness to King’s guitar licks.

After I’ll Play the Blues for You, King recorded another album with the Bar-Kays, I Wanna Get Funky (1974). The record mixed standard blues licks with the latest in funk (along with a few traditional-style blues tracks) and is considered his last strong album.