We’re all happy for this 73rd birthday of saxophonist/vocalist/bandleader/sideman, Maceo Parker. 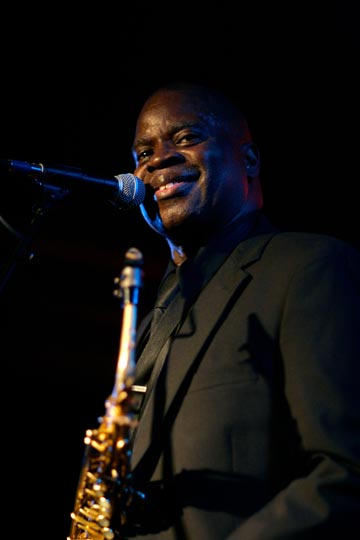 A cornerstone of Funk and R&B, Maceo Parker.

Parker was born on February 14, 1943 in Kinston, North Carolina. His father played piano and drums; his mother and father both sang in church. His brother Melvin played drums and his brother Kellis trombone. He and his brother Melvin joined James Brown in 1964; in his autobiography, Brown says that he originally wanted Melvin as his drummer, but agreed to take Maceo under his wing as part of the deal. In 1970 Parker, his brother Melvin, and a few of Brown’s band members left to found Maceo & All the King’s Men, which toured for two years. Recorded and released after a mutiny by most of James Brown‘s late-’60s band, Doing Their Own Thing contains 12 slabs of superb early-’70s style funk. Mostly instrumental, radio play for the album and subsequent singles appears to have been blocked by Brown himself. Two years later brought Funky Music Machine; it remains to be seen whether that is the length of time it takes for Brown‘s influence to wear off.

In 1974, Parker returned to James Brown. He also charted a single “Parrty – Part I” (#71 pop singles) with Maceo & the Macks that year. In 1975, Parker and some of Brown’s band members, including Fred Wesley, left to join George Clinton’s band Parliament-Funkadelic. Parker once again re-joined James Brown from 1984 to 1988.

It’s fairly common knowledge that Maceo has played with each and every leader of ; jumping aboard the Mothership with George Clinton; and his ongoing part in Prince’s tours. He’s the living, breathing pulse which connects the history of Funk in one golden thread. The cipher which unravels dance music down to its core.

Everything’s coming up Maceo, concluded DownBeat Magazine in a 1991 article at the beginning of Maceo Parker’s solo career. At the time Maceo was a remembered by aficionados of funk music as sideman; appreciated mainly by those in the know. For the last two decades Maceo Parker has been enjoying a blistering solo career, building a new funk empire; one that is both fresh and stylistically diverse. He navigates deftly between James Brown’s 1960’s soul and George Clinton’s 1970’s freaky funk while exploring mellower jazz and the grooves of hip-hop.

His collaborations over the years have included Ray Charles, Ani Difranco, James Taylor, De La Soul, Dave Matthews Band and the Red Hot Chilli Peppers. His timeless sound has garnered him a fresh young fan base.

In the 1990s, Parker began a solo career. His first album of this period “Roots Revisited” spent 10 weeks at the top of the Billboard Contemporary Jazz Charts To date he has released 11 solo albums since 1990. His band has been billed as “the greatest little funk orchestra on earth” and the “million-dollar support band”.

Parker’s album Roots & Grooves with the WDR Big Band is a tribute to Ray Charles, whom Parker cites as one of his most important influences. The album won a Jammie for best Jazz Album in 2009. Parker followed this up with another collaboration with WDR Big Band in 2012 with the album Soul Classics.

In October 2011, Parker was inducted in the North Carolina Music Hall of Fame.

In July 2012 Parker was the recipient of a Lifetime Achievement Award from Victoires Du Jazz in Paris. He continues touring, headlining many jazz festivals in Europe and doing as many as 290 concerts a year.

It is almost impossible to separate which came first, Maceo or the funk.

The amazing P-funk Parker has been at it with his legendary sound for time that dates back to the 1960’s. That’s when Maceo and his drummer brother Melvin climbed on board the James Brown funky soul funk train. It wasn’t long before James coined the solo summoning signature, “Maceo, I want you to Blow!“. To most musicologists it’s the musically fertile group of men from this period of James Brown’s band who are recognized as the early pioneers of the modern funk and hip-hop whose sounds we still jump to in the present day.

Here’s his band performing at a German jazz festival in 2003, Jazzwoche.