West Side Chicago blues guitarist Otis Rush was an influence on many musicians including Michael Bloomfield, Peter Green and Eric Clapton. Click the image for more of his music. 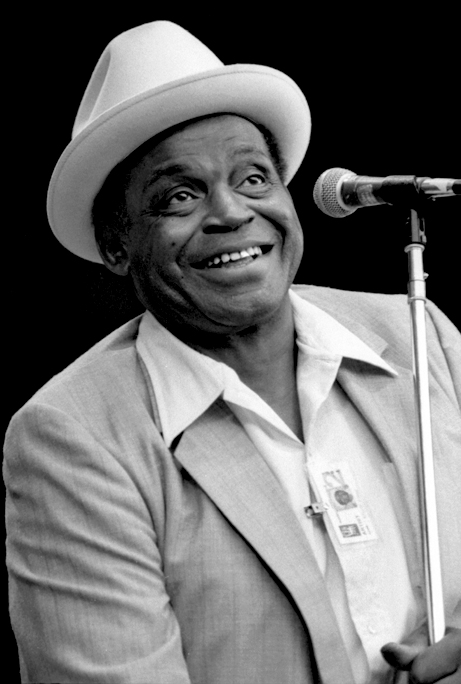 Willie Dixon was one of the architects of the post-World War II sound of the Chicago blues. For more of his music, click the image.

Otis Rush is back with a mid-60s concert performance of his first hit I Can’t Quit You Baby. Following an introduction to the audience courtesy of Roosevelt Sykes, Otis breaks out with a stunning vocal at the start. Since he recorded it in 1956 this song, written by Willie Dixon, has been covered by many others including the British rock
band Led Zeppelin. Rush is left-handed and, unlike many other left-handed guitarists, plays a left-handed instrument strung upside-down with the low E string at the bottom. He has played often with the little finger of his pick hand curled under the low E for positioning. It is widely believed that this contributes to his distinctive sound. He has a wide-ranging, powerful tenor voice.

After moving to Chicago, Illinois in 1948, Rush made a name for himself playing in clubs on both the South Side and West Side blues scenes. From 1956 to 1958, he recorded for the Cobra Records and released eight singles, some featuring Ike Turner or Jody Williams on guitar. His first single I Can’t Quit You Baby in 1956 reached No. 6 on Billboard’s R&B chart. During his tenure with Cobra, he recorded some of his well known songs such as Double Trouble and All Your Love (I Miss Loving).

After Cobra Records went bankrupt in 1959, Rush landed a recording contract with Chess in 1960. He recorded eight tracks for the label, four of which were released on two singles that year. Six tracks including the two singles later came out on Door To Door album in 1969, a compilation also featuring Chess recordings by Albert King.

William James “Willie” Dixon (July 1, 1915 – January 29, 1992) was an American blues musician, vocalist, songwriter, arranger and record producer. A Grammy Award winner who was proficient on both the upright bass and the guitar and as a vocalist, Dixon is perhaps best known as one of the most prolific songwriters of his time. Next to Muddy Waters, Dixon is recognized as the most influential person in shaping the post-World War II sound of the Chicago blues.

Dixon’s songs have been recorded by countless musicians in many genres as well as by various ensembles in which he participated. A short list of his most famous compositions includes Hoochie Coochie Man, I Just Want to Make Love to You, Little Red Rooster, My Babe, Spoonful, and You Can’t Judge a Book by the Cover. These tunes were written during the peak of Chess Records, 1950–1965, and performed by Muddy Waters, Howlin’ Wolf, Little Walter, and Bo Diddley; they influenced a worldwide generation of musicians.

Dixon also was an important link between the blues and rock and roll, working with Chuck Berry and Bo Diddley in the late 1950s. His songs were covered by some of the biggest artists of more recent times, such as Bob Dylan, Cream, Jeff Beck, the Doors, Jimi Hendrix, Led Zeppelin, the Rolling Stones and Steppenwolf.