A guitar chord diagram is a picture of a section of the fretboard and neck if it was standing up vertically. The vertical lines represent the strings, and the horizontal lines are the fret bars.The vertical line furthest to the right is the 1st string, and the furthest to the left is the 6th string. If the top horizontal line is thicker, then that represents the nut of the guitar. (see parts of the guitar) Then the next lower horizontal line is the 1st fret bar, and the next lower would be the 2nd and so on. These are how we show the chords for basic rhythm guitar.

The dots tell you where to put your fingers, and the numbers underneath the chord chart tell you what fingers to use. A 0 stands for an open string. An X means to either not play the string, or mute it. We will talk more about muting a string shortly. If there is a T, then you use your thumb to play that note. 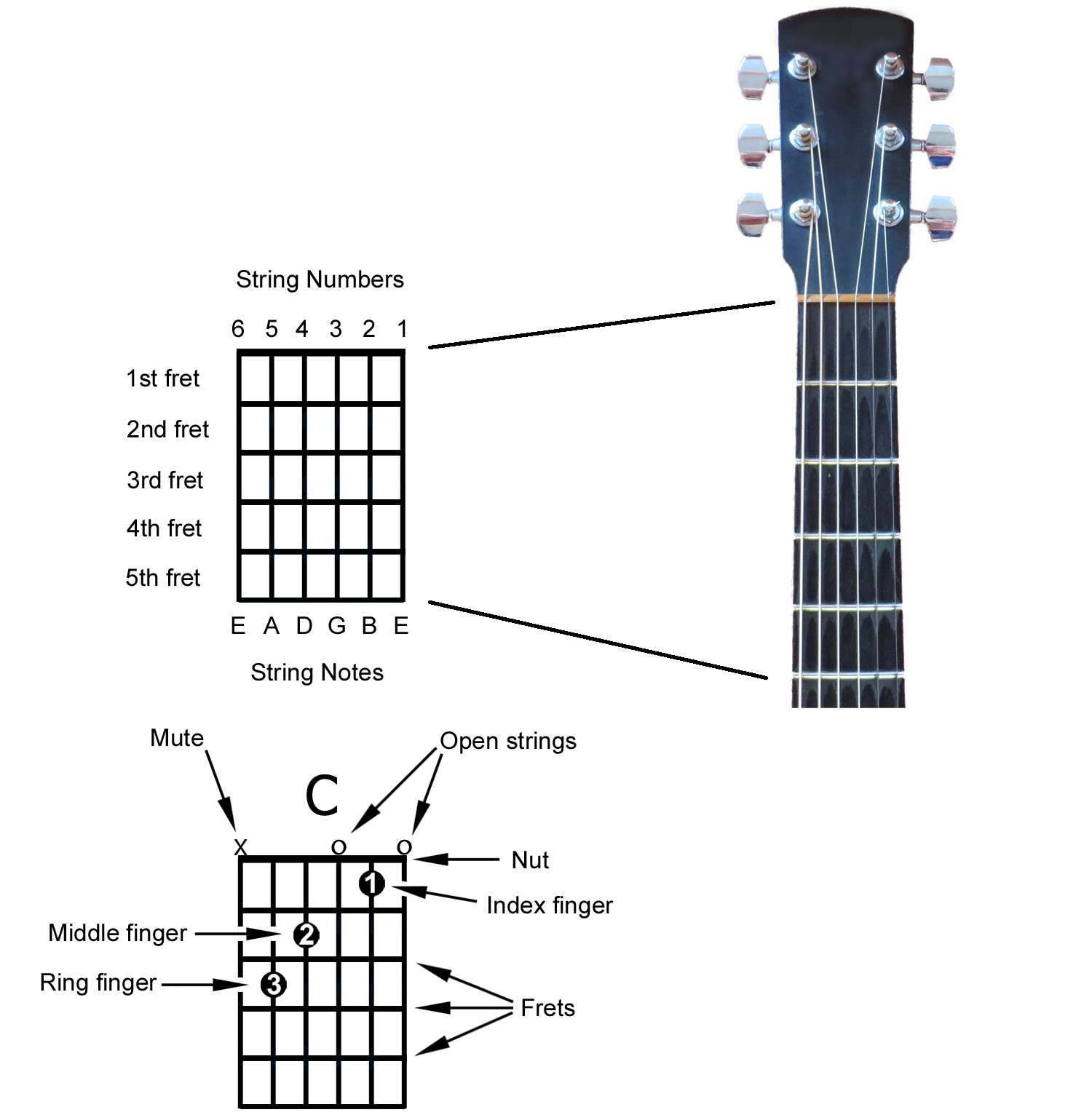 When we are given a Chord Chart to play, this is almost always either a music notation staff with chords listed over measures. Handwritten chord charts are not uncommon. Chord slashes are usually used to indicate how many beats are in the measure with chords being strummed.

In a more specific example, the chord slashes may include additional stems, flags, and beams to specify particular rhythms for the chords to be strummed.

This example could sound exactly the same as the one above it. This example specifies quarter note, eight note, and a whole note strum at the end. The chords are placed directly above the beat that they should be heard. Beat one is correct for each measure here.

Strum Down, Strum Up

To play the best sounding groove in the rhythm above, the rule of thumb dictates that we play downstrums on beats of the pulse. As we’re in 4/4 time, the downstrum takes the quarter note pulse. The strumming hand falls in line with where the foot taps to keep the beat.

However, that rule is not set in stone. If we subdivide the beat into shorter rhythms, the strumming hand may consider the eighth note as the pulse. Look for the smallest subdivision in the piece and consider that to be the down-up strum rhythm.

Let’s try a simple rhythm with a couple of basic chords.

The next example makes use of two new concepts in chord charts: the simile marking along with chord slashes, and Cut Time. Instead of 4/4 time, this new time signature looks the same, but the feel is different. Cut Time is 2/2, which means 2 pulses(beats) per measure, and the half note gets the beat. So, one would tap their foot on the half note, and there would be 2 quarter notes per beat. This causes the eighth notes to be twice as fast, which would count as 1-ee-&-ah, 2-ee-&-ah.Two strums per foot tap:

In the previous example, notice that although Am changes to C easily, we may have decided to move the second and third fingers up for the change to the G chord. However, if we choose the G chord that includes the third and fourth fingers on the bottom strings of the chord, we now have a D note on string 2 which voiceleads smoothly to the D note in the impending D chord.