Blues are passed down to the next generation by Arthur “Big Boy” Crudup as he plays “Grayhound Bus Blues,” one of his hits of the late 40’s, in a band with his sons. 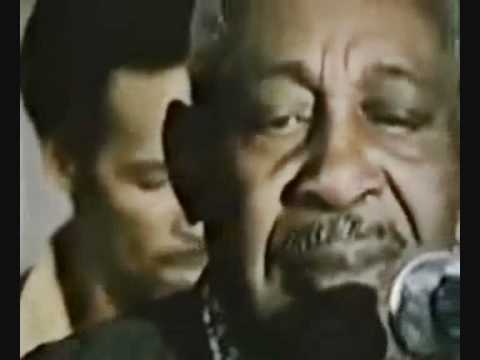 Arthur Crudup performs his famous “Grayhound Bus Blues” with the Crudup Brothers Blues Band consisting of his sons Jonas (guitar), Charles (keyboards), George (bass), and James (drums), near his home in Virginia during the mid-1970s.

From the mid-1960s, Crudup returned to bootlegging and working as an agricultural laborer, chiefly in Virginia, where he lived with his family including three sons and several of his own siblings. On the Eastern Shore of Virginia, while he lived in relative poverty as a field laborer, he occasionally sang and supplied moonshine to a number of drinking establishments, including one called The Dew-Drop Inn, in Northampton County, for some time prior to his death from complications of heart disease and diabetes. He died of a heart attack in the Nassawadox hospital in Northampton County, Virginia on March 28, 1974. There was some confusion in regards to his actual date of death because he used several names.

Arthur “Big Boy” Crudup was honored with a marker on the Mississippi Blues Trail placed at Forest, Mississippi his place of birth.