Allen Toussaint is one of the most influential songwriters/musicians in American music. 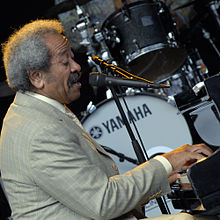 New Orleans’ own Allen Toussaint. Click the image for more of his music.

Toussaint grew up in a shotgun house in the New Orleans neighborhood of Gert Town, where his mother, Naomi Neville (whose name he later adopted pseudonymously for some of his works), welcomed and fed all manner of musicians as they practiced and recorded with her son. After a lucky break at age 17 in which he stood in for Huey Smith at a performance with Earl King’s band in Prichard, Alabama. Toussaint was introduced to a group of local musicians who performed regularly at a night club on LaSalle street Uptown; they were known as the Dew Drop Set. He initially recorded for RCA Victor as Al Tousan and recorded an album of instrumentals, including the song “Java”, which became a #1 hit for Al Hirt (also on RCA) in 1964.

A significant early influence on Toussaint was the second-line piano style of Professor Longhair. In his early years he worked mainly for Joe Banashak’s Minit Recordsand Instant Records, but after Minit was sold to its distributor, he teamed up with Marshall Sehorn, starting their own record label variously known as Tou-Sea, Sansu, Deesu or Kansu. In 1973 Toussaint and Sehorn created the Sea-Saint recording studio in Gentilly.

In the early 1960s he wrote and produced a string of hits for New Orleans R&B artists such as Ernie K-Doe, Irma Thomas, Art and Aaron Neville, The Showmen, and Lee Dorsey. Toussaint’s piano and arrangements show up on hundreds of records during the early 1960s on records by Lee Dorsey, Chris Kenner, and scores of other artists. Starting in the 1970s, he switched gears to a funkier sound, writing and producing for The Meters, Dr John, and the Wild Tchoupitoulas Mardi Gras Indians tribe.

Toussaint died in the early hours of November 10, 2015 while on tour in Madrid, Spain. Following a concert at the Teatro Lara, he suffered two cardiac arrests at his hotel and was pronounced dead on his arrival at hospital. He was 77. He is survived by his two children, including son Clarence (better known as Reginald) and daughter Alison, and by several grandchildren. His children had managed his career in recent years.