Choice material from the John Coltrane Quartet recorded in the early 60s. A filmed version of “Naima” that I’ve never seen before. You can hear Coltrane shifting from ballad to sheets of sound and back again. 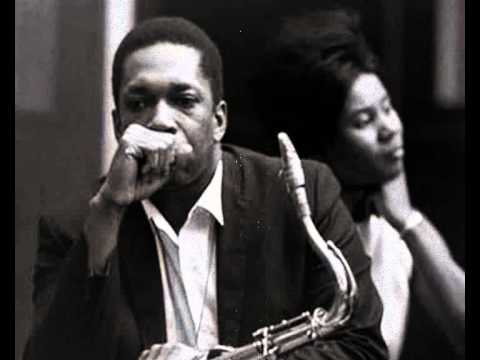 Coltrane and Juanita Naima Grubbs, his then-wife, whom he wrote “Naima” for. Click the image for a recording of the tune.

The “sheets of sound” approach can be heard as early as the 1957 collaboration with Monk in solos like the one on Trinkle, Tinkle from the album Thelonious Monk with John Coltrane. Coltrane’s live performance of If I Were a Bell with the Miles Davis sextet on September 9, 1958, well exemplifies his use of the “sheets of sound” during this stage of his career. In Trane on the Track, an article published on October 16, 1958 in Down Beat magazine, Coltrane spoke to Ira Gitler about the sheets of sound, telling him, Now it is not a thing of beauty, and the only way it would be justified is if it becomes that. If I can’t work it through, I will drop it. Coltrane began using the style intermittently in 1959, preferring to incorporate it into his solos in a less abrupt manner.

This ballad composed in 1959 was named for Coltrane’s then-wife Juanita Naima Grubbs. The tune made its first appearance on Coltrane’s Giant Steps album. The melody is simple, but the harmonies under it are quite rich contributing to its popularity and status as a modern jazz standard. Coltrane recorded it numerous times.