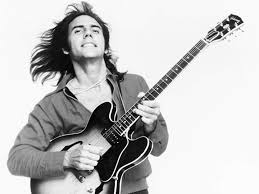 Mr. 335, Larry Carlton. To check out his music, select the image.

Larry Carlton’s own musical story began in Southern California. He picked up his first guitar when he was only six years old. He was introduced to jazz in junior high school after hearing The Gerald Wilson Big Band album, Moment of Truth, with guitarist Joe Pass. Larry then became interested in Barney Kessel, Wes Montgornery and the legendary blues guitarist B.B. King. Saxophonist John Coltrane was also a major influence on Carlton, beginning with Coltrane’s 1962 classic Ballads.

In 1968 he recorded his first LP, With A Little Help From My Friends (Uni). The enthusiastic industry response garnered him a place among jingle singers The Going Thing, recording on camera and radio commercials for Ford. Mid-season in his second year, he segued to Musical Director for Mrs. Alphabet, an Emmy-nominated children’s show on the same network. It was here that Carlton showcased his acting skills, performing as the show’s co-star, “Larry Guitar.”

Calls began to increase significantly as Carlton gained distinction for the unmistakable and often imitated “sweet” sound he delivered with his Gibson ES-335. He also broke new ground with his new trademark volume pedal technique, eloquently displayed in his featured performance on ­Crusaders One with legendary jazz/rock group The Crusaders in 1971. Joni Mitchell’s Court and Spark album, the first record she made with a rhythm section, displays his distinctive Technique – a style Mitchell referred to as “fly fishing.”

Here’s a video of Carlton playing live in 2012. Guitarist Larry Carlton performs with his band “Minute by Minute” at “Jazz A Vienne” 2012.  After signing with Warner Brothers in 1977 he released a self title album the following year, commonly known as the “Room 335 album” because it was produced in Carlton’s own Room 335 studio. His playing can be heard on the theme music for “Hill Street Blues.”