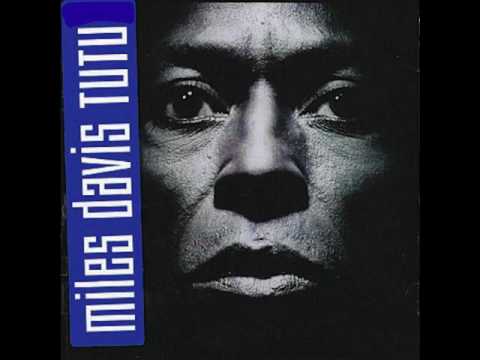 In 1985, Miles Davis’ thirty year association with Columbia Records came to an end and the jazz legend, who managed to reinvent jazz a dozen times over managed to reinvent the price value of jazz recording contracts when he signed with Warner Brothers. What Davis unfortunately didn’t seem to do was read past the bottom line and his royalties for songwriting would lie with Warner Brothers, not with him. As a result, Davis refused to compose anything on his own and instead brought his former bass player Marcus Miller to compose for him. Miller wrote compositions for Davis and set up a framework in which the trumpeter could solo.

Originally planned as a collaboration with pop singer/songwriter Prince, Tutu became one of the “defining jazz albums” of its decade and a attracted young, new audience while alienating many other jazz listeners because of its heavy reliance on the drum machine and synthesizers. The album is named in tribute to Archbishop Desmond Tutu, the first black Anglican Archbishop of Cape Town, South Africa. The track Full Nelson refers to South African politician Nelson Mandela. Miles had previously taken part in Artists United Against Apartheid and this CD finds him putting his complete artistic signature in the criticism of the institutionalized white racism in South Africa.

In J. D. Considine’s opinion, the album’s compositions and improvisations endured well with the passage of time, even though its electronically processed and enigmatic music turned off jazz purists.

This track, Tutu, is off of the Miles Davis 1986 album of the same name, which Davis originally intended to be a collaboration with Prince. He would ultimately turn to work with bassist Marcus Miller, who would write most of the music on the album, including this song. The song and album’s titles are in tribute to Desmond Tutu, the influential Anglican bishop.