Machine Gun is one of Jimi Hendrix’s greatest creative outlets. 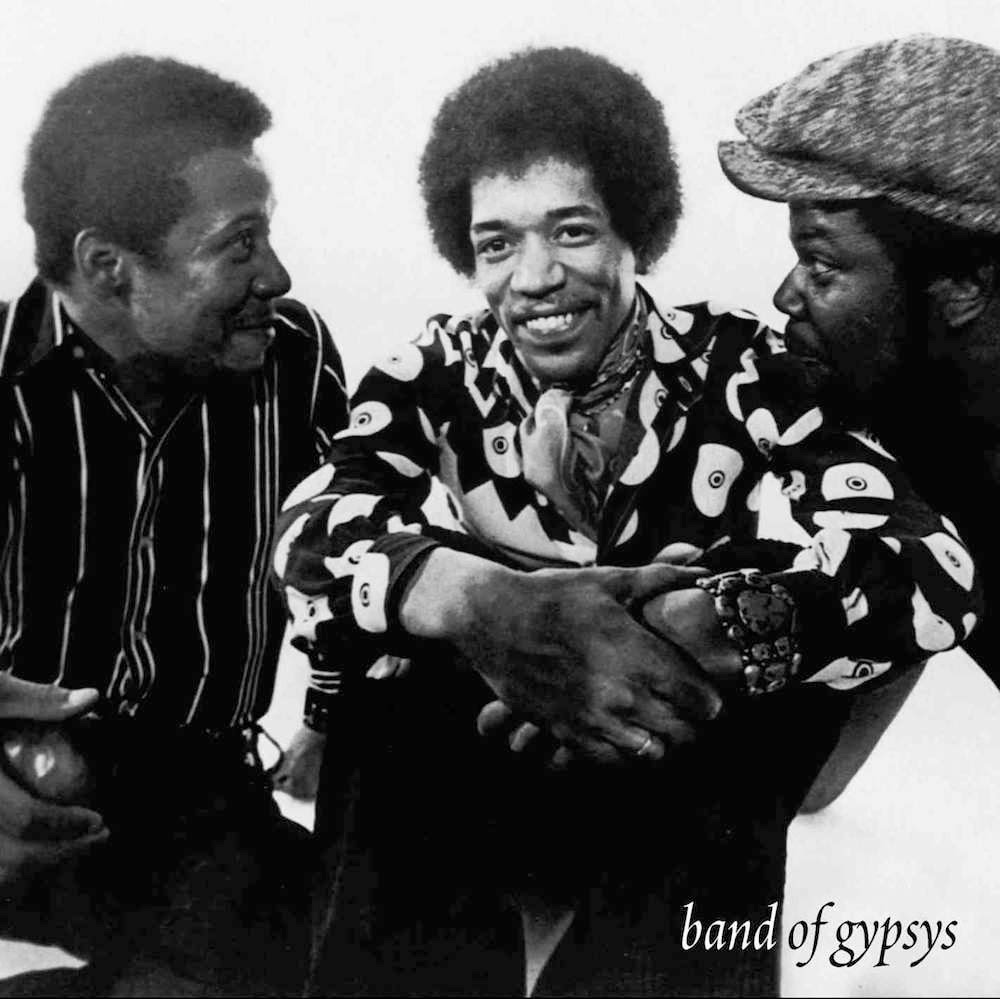 Jimi, Billy, and Buddy: the Band Of Gypsys. For more of their music, click the image.

Band of Gypsys was the only live recording authorized by Jimi Hendrix before his death. It was recorded and released in order to get Hendrix out from under a contractual obligation that had been hanging over his head for a couple years. Helping him out were longtime friends Billy Cox on bass and Buddy Miles on the drums because the Experience had broken up in June of 1969, following a show in Denver. This rhythm section was vastly different from the Experience. Buddy Miles was an earthy, funky drummer in direct contrast to the busy, jazzy leanings of Mitch Mitchell. Noel Redding was not really a bass player at all but a converted guitar player who was hired in large part because Hendrix liked his hair! These new surroundings pushed Hendrix to new creative heights.

Along with this new rhythm section, Hendrix took these shows as an opportunity to showcase much of the new material he had been working on. The music was a seamless melding of rock, funk, and R&B, and tunes like “Message to Love” and “Power to Love” showed a new lyrical direction as well. Although he could be an erratic live performer, for these shows, Hendrix was on — perhaps his finest performances. His playing was focused and precise. In fact, for most of the set, Hendrix stood motionless, a far cry from the stage antics that helped establish his reputation as a performer.

After his appearance at Woodstock with an interim group that included Cox, Hendrix began developing new songs and recording demos. When Miles became involved, he and Cox agreed to record a live album with Hendrix to be used to settle a contract dispute with a former manager. The new material, influenced by Cox’s and Miles’ musical approaches, signal a new direction for Hendrix. Songs such as “Power of Soul” and “Message to Love” (originally “Power to Love” and “Message of Love”[a]) still maintain the dominant role of Hendrix’s guitar, but show funk and R&B influences. Lyrically, they also explore new, more humanistic themes for Hendrix. The two numbers written and sung by Miles bear the stylings of soul music. The anti-riot/anti-war “Machine Gun“, draws on Hendrix’s earlier blues aspirations, but incorporates new approaches to guitar improvisation and tonal effects.

As the album’s producer, Hendrix had a difficult time completing the task.

Presented with the sometimes problematic recordings and resigned to turning it over to a different record company, Hendrix expressed his dissatisfaction with the final product. Shortly after its release, Band of Gypsys reached the top ten of the album charts in the US and UK as well as appearing in charts in several other countries. Although it was as popular as his albums with the Experience, it received mixed reviews. Some faulted the performances as tentative and underprepared; additionally, Miles’ contributions on drums and vocals have been characterized as plodding and obtrusive. However, Machine Gun is generally regarded as the album’s highlight and one of Hendrix’s greatest achievements.

Equipment problems had plagued him in past live shows as well, but everything was perfect for the Fillmore shows.

Jimi’s absolute mastery of his guitar and effects is even more amazing considering that this was the first time he used the Fuzz Face, wah-wah pedal, Univibe, and Octavia pedals on-stage together. The guitar tones he gets on Who Knows and Power to Love are powerful and intense, but nowhere is his absolute control more evident than on Machine Gun, where Hendrix conjures bombs, guns, and other sounds of war from his guitar, all within the context of a coherent musical statement. The solo on Machine Gun totally rewrote the book on what a man could do with an electric guitar and is arguably the most groundbreaking and devastating guitar solo ever. These live versions of Message to Love and Power to Love are far better than the jigsaw puzzle studio versions that were released posthumously. Two Buddy Miles compositions are also included, but the show belongs to Jimi all the way. Band of Gypsys is not only an important part of the Hendrix legacy, but one of the greatest live albums ever.