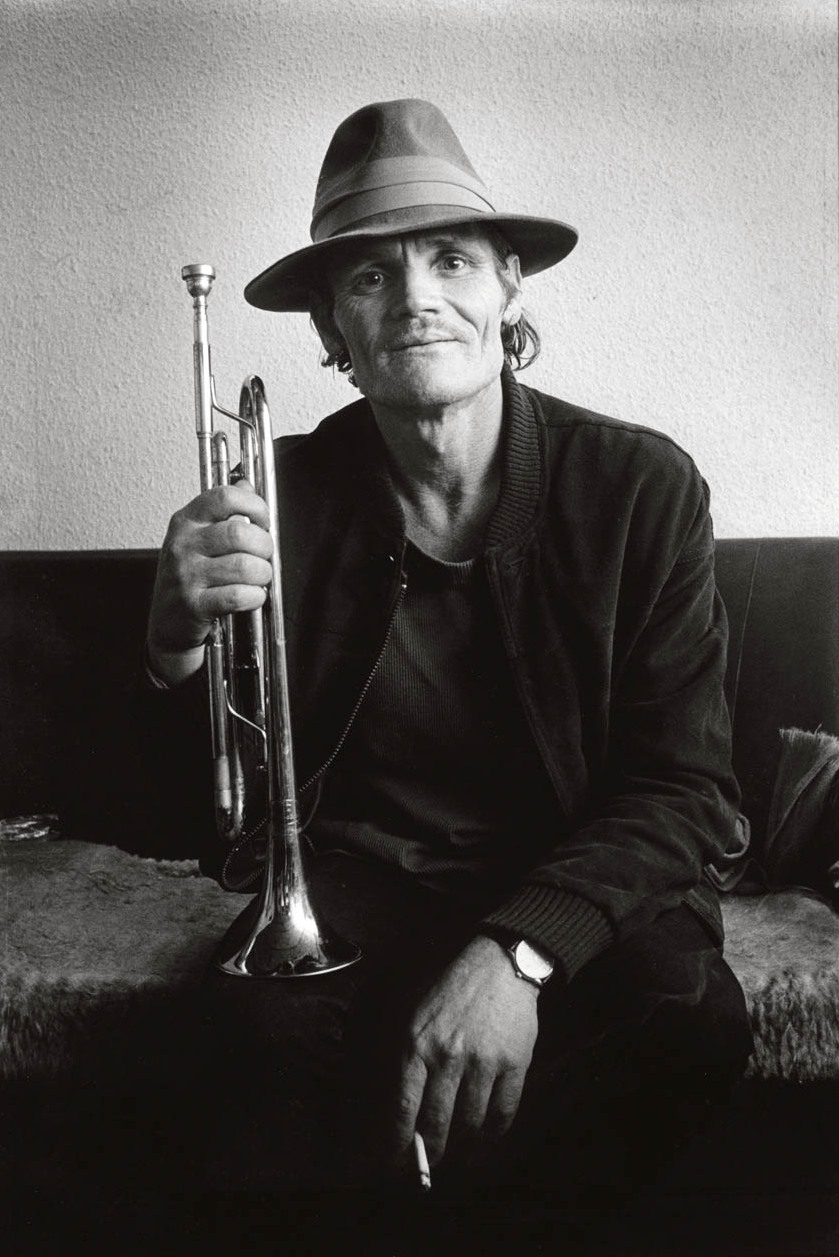 Chet Baker. For more of his music, click the image

Chesney Henry “Chet” Baker Jr. was born on December 23, 1929. Baker began playing trumpet in high school, and dropped out at age 16 to enlist in the United States Army, where he played in the band. In 1952 Baker joined the Gerry Mulligan quartet, which raised his profile dramatically. Baker found success in Europe in the 1970’s, recording most of his music during this time.

Baker earned much attention and critical praise through the 1950s, particularly for albums featuring his vocals (Chet Baker Sings, It Could Happen to You). Jazz historian David Gelly described the promise of Baker’s early career as “James Dean, Sinatra, and Bix, rolled into one.” His well-publicized drug habit also drove his notoriety and fame; Baker was in and out of jail frequently before enjoying a career resurgence in the late 1970s and ’80s.

After developing a new embouchure resulting from dentures, Baker returned to the straight-ahead jazz that began his career. He relocated to New York City and began performing and recording again, including with guitarist Jim Hall. Later in the 1970s, Baker returned to Europe, where he was assisted by his friend Diane Vavra, who took care of his personal needs and otherwise helped him during his recording and performance dates.

From 1978 until his death in 1988, Baker resided and played almost exclusively in Europe, returning to the USA roughly once a year for a few performances. This was Baker’s most prolific era as a recording artist. However, as his extensive output is strewn across numerous, mostly small European labels, none of these recordings ever reached a wider audience, even though many of them were well received by critics, who maintain that the period was one of Baker’s most mature and rewarding. Of particular importance are Baker’s quartet featuring the pianist Phil Markowitz (1978–80) and his trio with guitarist Philip Catherine and bassist Jean-Louis Rassinfosse (1983–85). He also toured with saxophonist Stan Getz during this period.

In 1983, British singer Elvis Costello, a longtime fan of Baker, hired the trumpeter to play a solo on his song “Shipbuilding”, from the album Punch the Clock. The song exposed Baker’s music to a new audience. Later, Baker often featured Costello’s song “Almost Blue” (inspired by Baker’s version of “The Thrill Has Gone”) in his concert sets, and recorded the song for Let’s Get Lost, a documentary film about his life.

The video material recorded by Japanese television during Baker’s 1987 tour in Japan showed a man whose face looked much older than he was, but his trumpet playing was alert, lively and inspired. Baker recorded the live album Chet Baker in Tokyo with his quartet featuring pianist Harold Danko, bassist Hein van de Geyn and drummer John Engels less than a year before his death, and it was released posthumously. Silent Night, a recording of Christmas music, was recorded with Christopher Mason in New Orleans in 1986 and released in 1987.