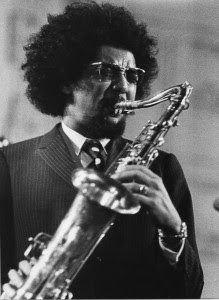 For more of Charles Lloyd’s groundbreaking music, click the image.

Lloyd recieved his first saxophone at age 9, and his childhood teachers included pianist Phineas Newborn, Jr. and saxophonist Irvin Reason. was voted Down Beat’s “Jazz Artist of the Year” in 1967. His music possesses a spiritual element while displaying a high level of creativity.

He studied classical music at the University of Southern California in Los Angeles, where he also got involved in the local jazz scene, playing with Ornette Coleman, Billy Higgins, Eric Dolphy and more. In 1965 Lloyd formed his own quartet, a group known for incorporating rock and non-Western music into their music. They collaborated with Janis Joplin, Jimi Hendrix and the Grateful Dead. He returned to the road in 1989 and made recordings for ECM highlighting his sensitive proficiency on ballads.

Here’s Lloyd’s New Quartet playing together in 2011. They perform Caroline No composed by Brian Wilson at the “Jazz at Porquerolles” Festival on the French Riviera, July 13 2011. During the 1970s Lloyd became a member of the The Beach Boys’ touring band and was featured extensively on their recordings.