John McLaughlin (born 4 January 1942 in Doncaster, South Yorkshire, England), also known as Mahavishnu John McLaughlin, is among the most advancing musicians on the planet today. 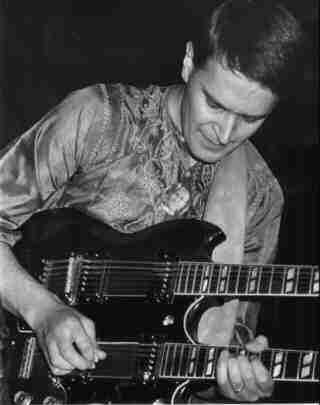 Mahavishnu John McLaughlin. Listen to his music by clicking on the image.

John has been cited as an influence by a number of prominent musicians. In 2010, guitarist Jeff Beck called him “the best guitarist alive”. McLaughlin was also referred to as the best guitarist alive by Pat Metheny. He is a Grammy award winner and has been awarded multiple “Guitarist of the year” and “Best Jazz Guitarist” awards from magazines such as Down Beat and Guitar Player based on reader polls.

John studied violin and piano as a child and took up the guitar at the age of 11, exploring styles from flamenco to the jazz of Django Reinhardt and Stéphane Grappelli. His early professional experiences were with stints with legendary Alexis Korner groups as well as legendary groups Georgie Fame and the Blue Flames, the Graham Bond Organisation (in 1963) and Brian Auger. Through this time, he became a major part in the quite exclusive studio session scene, honing his playing and sight-reading skills. He found himself often sharing session duties with guitarist Jimmy Page, later of the Yardbirds and Led Zeppellin. McLaughlin also gave lessons to Page.

1969 was a busy year for McLaughlin. Having played in Georgie Fame’s celebrated group with Jack Bruce and Ginger Baker, who would come to pioneer the blues/rock trio, Cream, McLaughlin was recruited by drummer Tony Williams to set the world on fire with the eclectic mix of rock, jazz, and blues. After being in America less than two weeks to join The Tony Williams Lifetime, Miles Davis asked him to attend the recording session. McLaughlin had been a longtime fan of Davis, and spoke of his nervousness to the trumpeter about the prospect of recording with his idol. This recording would turn out to be In A Silent Way, the record is considered the first of Davis’s fusion recordings, while marking the beginning of his “electric” period. McLaughlin would also continue to play a big part in Miles’ groundbreaking Bitches Brew, and would add to Mile’s subsequent records, Live-Evil, On The Corner, Big Fun, etc.

In January 1969, McLaughlin recorded his debut album Extrapolation in London. It prominently features John Surman on saxophone and Tony Oxley on drums. The album’s Post-bop style is quite different than McLaughlin’s later fusion works, though it gradually developed a strong reputation among critics by the mid-1970s. His reputation as a “first-call” session player grew, resulting in recordings as a sideman with Miroslav Vitous, Larry Coryell, Joe Farrell, Wayne Shorter, Carla Bley, the Rolling Stones, and others. In 1969, McLaughlin would also meet, and jam with, Jimi Hendrix.

Being known for more electric and fusion music at that point, particularly with his release of the album Devotion, which included legendary organist Larry Young, who had been a member of Tony Williams Lifetime alongside John, and had been a part of the McLaughlin/Hendrix session, in 1971 he released My Goal’s Beyond in the US, a collection of unamplified acoustic works. Side A (Peace One and Peace Two) offers a fusion blend of jazz and Indian classical forms, while side B features melodic acoustic playing McLaughlin on such standards as Goodbye Pork Pie Hat, by Charles Mingus whom McLaughlin considered an important influence. My Goal’s Beyond was inspired by McLaughlin’s decision to follow the Indian spiritual leader Sri Chinmoy, to whom he had been introduced in 1970 by Larry Coryell’s manager. The album was dedicated to Chinmoy, with one of the Guru’s poems printed on the liner notes. It was on this album that McLaughlin took the name Mahavishnu.

The Mahavishnu Orchestra’s personality clashes were as explosive as their performances, and consequently the first incarnation of the group split in late 1973 after two years and three albums, including a live recording entitled Between Nothingness and Eternity. In 2001 the Lost Trident Sessions album was released; recorded in 1973 but shelved when the group disbanded. John then reformed the group with Narada Michael Walden (drums), Jean-Luc Ponty (violin), Ralphe Armstrong (bass), and Gayle Moran(keyboards and vocals), and a string and horn section (McLaughlin referred to this as “the real Mahavishnu Orchestra”). This incarnation of the group recorded two more albums, Apocalypse with the London Symphony Orchestra and Visions of the Emerald Beyond. A scaled-down quartet was formed with McLaughlin, Walden on drums, Armstrong on bass and Stu Goldberg on keyboards and synthesiser, which generated a third “Mahavishnu 2” recording in 1976 largely due to contractual obligations, Inner Worlds.

In between the first two Mahavishnu records, John met Carlos Santana in 1971 and the two guitarists became good friends. They recorded the John Coltrane-inspired Love Devotion Surrender album and went on to tour but only in the USA. It was an all-star lineup with drummer Billy Cobham, Dougie Rauch on bass, Armando Peraza percussion and the late great Larry Young (Khalid Yasin) on Hammond organ.

At the time that John was working with transition between the two Mahavishnu bands, the Indian influences on him showed up in a side group that would become his main group, called Shakti. Alongside of John, Indian violin player L. Shankar, Zakir Hussain (on tabla), Ramnad Raghavan (on the Mridangam), and T. H. “Vikku” Vinayakram (on Ghatam). In addition to fusing Euro-American and Indian music, Shakti also represented a fusion of the Hindustani and Carnatic music traditions, since Hussain is from the North while the other Indian members are from the South. In this group McLaughlin played a custom-made steel-string J-200 acoustic guitar made by Abe Wechter and the Gibson guitar company that featured two tiers of strings over the soundhole: a conventional six-string configuration and seven strings strung underneath at a 45-degree angle – these were independently tuneable “sympathetic strings” much like those on a sitar or veena. The instrument’s vina-like scalloped fretboard enabled McLaughlin to bend strings far beyond the reach of a conventional fretboard. McLaughlin grew so accustomed to the freedom it provided him that he had the fretboard scalloped on his Gibson Byrdland electric guitar.

In 1998, Shakti was reformed, with some alternate members, and electric guitar with the group Remember Shakti.

This was all a new focus on the acoustic guitar, which would continue after the initial Shakti group. With a slight sidestep back to the electric guitar for his Electric Dreams record, John continued his love-affair in 1979 with an acoustic guitar trio of legendary proportions. This would include flamenco guitar master Paco DeLucia, and another jazz-fusion pioneer, Larry Coryell. Coryell was replaced by Al DiMeola in the early 1980s. For their tour of fall 1983, they would appear with Steve Morse as an opening solo act, and he would join them for their closing numbers.

From 1984 through to (circa) 1987, an electric five-piece operated under the name “Mahavishnu” (omitting the “Orchestra”), which included, among others amazing musicians, Billy Cobham on drums, then Danny Gottlieb, and saxophonist Bill Evans. Acoustic outings with orchestra, and a trio featuring John’s acoustic guitar with a bassist and percussionist tended to take up his touring through late 1980s through most of the 1990s.

John has focused mostly on jazz fusion with his fusion quartet, 4th Dimension. With a number of more independent releases, this band has afforded John an amazing amount of freedom in improvising and the usual expertise of all his sidemen. To close out this post, let’s take in the genius that is John McLaughlin on his birthday with this full concert.