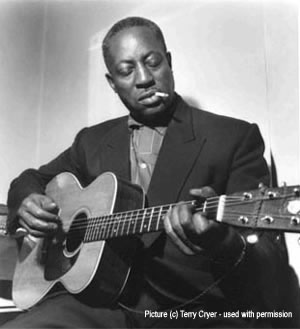 “Backwater Blues” was written by “The Empress of the Blues” Bessie Smith. She originally recorded it on February 17, 1927 in New York backed on piano by James P. Johnson. The song depicting a recent Mississippi flood disaster.

In 1951 Big Bill Broonzy toured Europe where he was greeted with standing ovations and critical praise wherever he played. The tour marked a turning point in his fortunes, and when he returned to the United States he was a featured act with many prominent folk artists such as Pete Seeger, Sonny Terry and Brownie McGhee. From 1953 on his financial position became more secure and he was able to live quite well on his music earnings. Broonzy returned to his solo folk-blues roots, and travelled and recorded extensively. Broonzy’s numerous performances during the 1950s in the UK, and in particular at folk clubs in London and Edinburgh, were influential in the nascent British folk revival, with British folk musicians such as Bert Jansch citing him as an important influence. While in the Netherlands, Broonzy met and fell in love with a Dutch girl, Pim van Isveldt. Together they had a child named Michael who still lives in Amsterdam today.

Broonzy copyrighted more than 300 songs during his lifetime, including both adaptations of traditional folk songs and original blues songs. As a blues composer, he was unique in that his compositions reflected the many vantage points of his rural-to-urban experiences. Although he had been a pioneer of the Chicago blues style and had employed electric instruments as early as 1942, his new, white audiences wanted to hear him playing his earliest songs accompanied only by his own acoustic guitar, since this was considered to be more “authentic”.

Like Bessie Smith, Big Bill was a great voice of the blues in his own right.