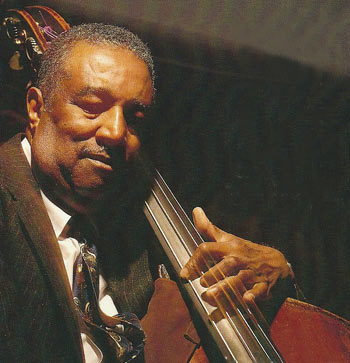 Ray Brown, one of the great jazz bassists of all time. Click the image to sample his music.

Raymond Matthews “Ray” Brown (October 13, 1926 – July 2, 2002) was an influential American jazz double bassist and cellist, known for extensive work with Oscar Peterson and Ella Fitzgerald, among many others.

Ray Brown was born in Pittsburgh, Pennsylvania and took piano lessons from the age of eight. After noticing how many pianists attended his high school, he thought of taking up the trombone but was unable to afford one. With a vacancy in the high school jazz orchestra, he took up the upright bass. From 1946 to 1951, bassist Brown, along with vibraphonist Milt Jackson, drummer Kenny Clarke, and pianist John Lewis formed the rhythm section of the Dizzy Gillespie band.

Ray Brown went on to form his own trio with a number of different pianists including Gene Harris, Benny Green, and Monty Alexander, who joins Ray on this recording, with Herb Ellis on the guitar. During 1990–93 the “Legendary Oscar Peterson Trio” reunited, with Peterson, Herb Ellis, and Brown, with either Bobby Durham or Jeff Hamilton added on drums. Albums of this group earned four Grammy Awards. In May 1993 this group ended, when Peterson suffered a severe stroke.

Written by Vincent Youmans for a musical in 1925, “No, No, Nanette,” “I Want to Be Happy” would climb the Billboard charts sporadically over the next 90 years – including at the hands (and throat) of Bing Crosby and Benny Goodman.

This was a period for Ray Brown when he would continue to lead trios, such as this one. Incidentally, in the early ’80s, Brown was responsible for introducing jazz Grammy superstar Diana Krall to her regular bassist, John Clayton.

In 2002, Brown died in his sleep, after having played golf, before a show in Indianapolis. In 2001, Brown was awarded the Austrian Cross of Honour for Science and Art, 1st class and in 2003, he was inducted into the Down Beat Jazz Hall of Fame.