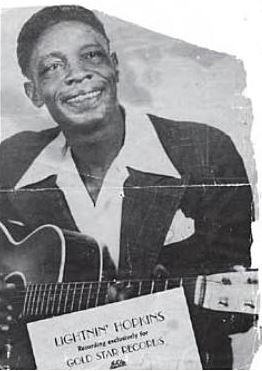 Lightnin’ Hopkins is captured on film performing his song “Mr. Charlie” for children in an excerpt from the 1968 Les Blank documentary “The Blues According to Lightnin’ Hopkins.”

Before singing this, he tells the story of a boy who stutters badly. When he tries telling his boss, Mister Charlie, his mill is burning down, Mister Charlie can’t understand him so he asks the boy to sing if he can’t speak. Story telling has always played an important part in the blues oral tradition.

Born Sam John Hopkins in Centerville, Texas, Hopkins’ childhood was immersed in the sounds of the blues and he developed a deeper appreciation at the age of 8 when he met Blind Lemon Jefferson at a church picnic in Buffalo, Texas. That day, Hopkins felt the blues was “in him” and went on to learn from his older (somewhat distant) cousin, country blues singer Alger “Texas” Alexander. Hopkins had another cousin, the Texas electric blues guitarist Frankie Lee Sims, with whom he later recorded. Hopkins began accompanying Blind Lemon Jefferson on guitar in informal church gatherings. Jefferson supposedly never let anyone play with him except for young Hopkins, who learned much from and was influenced greatly by Blind Lemon Jefferson thanks to these gatherings. In the mid-1930s, Hopkins was sent to Houston County Prison Farm for an unknown offense. In the late 1930s, Hopkins moved to Houston with Alexander in an unsuccessful attempt to break into the music scene there. By the early 1940s, he was back in Centerville working as a farm hand.