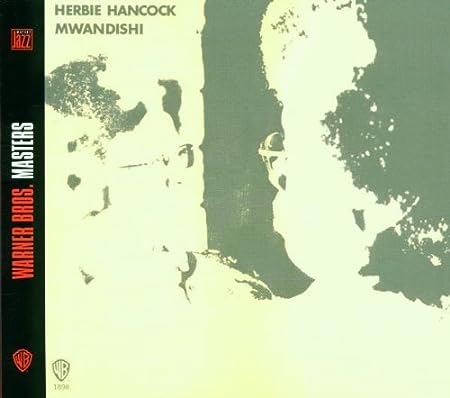 Click the image to buy your own copy of Mwandishi

There’s so little live footage of this groundbreaking band.

Herbie moves quickly from period to period. If you’re unaware of this music, you would be doing yourself a huge favor to do some research. Clear your mind a bit, this isn’t something you’ll be hearing on the radio. With the formation of his great electric sextet, Herbie Hancock’s music took off into outer and inner space, starting with the landmark Mwandishi album recorded in a single session on New Year’s Eve. Ever the gadgeteer, Herbie plays with electronic effects devices — reverb units, stereo tremelo, and Echoplex — which all lead his music into spacier, open-ended directions very much influenced by Miles Davis’ electric experiments, rendering it from post-bop conventions. There are just three tracks: the insistent 15/4-meter Afro-electric-funk workout “Ostinato (Suite for Angela),” the inquisitive “You’ll Know When You Get There” with its ethereal Hancock voicings, and trombonist Julian Priester’s “Silent Way”-influenced “Wandering Spirit Song,” which eventually dips into tumultuous free form. Eddie Henderson emerges as a major trumpet soloist here, probing, jabbing, soliloquizing; Bennie Maupin comes over from Lee Morgan’s group to add his ominous bass clarinet and thoughtful alto flute; and Buster Williams’ bass and Billy Hart’s flexible drums propel the rhythm section. Santana’s José Chepitó Areas and Leon “Ndugu” Chancler also add funky percussive reinforcement to “Ostinato,” along with guitarist Ron Montrose. The group’s collective empathy is remarkable, and Hancock had only begun to probe the outer limits with this extraordinary music.