No, this isn’t an unreleased recording of Jimi Hendrix and Miles Davis. 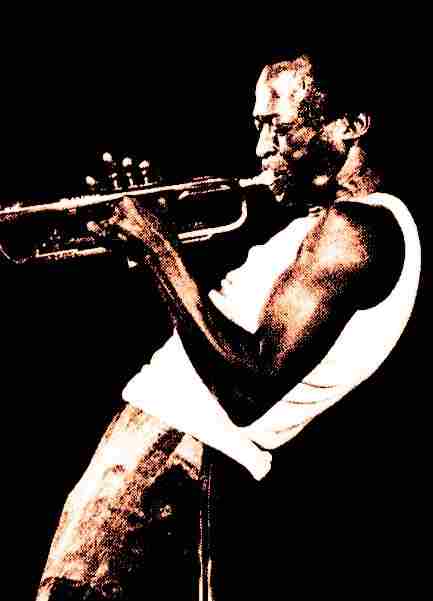 Miles’ later music was as brilliant as it was unconventional. He continued to tour and perform until his death in 1991. To hear his music, select his image above.

One of the great tragedies in modern music was the potential recording session between the Electric Gypsy and the Prince of Darkness. Davis said in his 1990  autobiography that he sometimes jammed with Hendrix at his New York apartment,  but finances and busy schedules prevented them from entering the studio. Hendrix  biographer Charles Shaar Murray and others say Davis sought $50,000 up front for  the session. Davis also wrote in his book that he and arranger Gil Evans were in  Europe planning to record with Hendrix at the time of guitarist’s death in  London.

They actually wanted Paul McCartney to join them on bass and Tony Williams on drums.  Had McCartney accepted it would have been the greatest rock super group ever created.  Davis and Hendrix went so far as to send McCartney a telegram asking him to join them and Williams for recording sessions.  It seems as if McCartney was on vacation and may never have received the telegram or taken it seriously.

In the wake of Hendrix’s untimely passing, other projects came to life.

Miles was in the middle of his exploration of electric music. He had started using electric instruments in his groups with 1968’s Miles In The Sky and Filles de Killimanjaro. Miles made the transformation to full rock music bandleader in 1969 with his groundbreaking record, In A Silent Way. Davis’ next 3 records showed the effect that Miles was feeling from the advent of rock and funk musicians James Brown, Sly & the Family Stone, and Jimi Hendrix. His greatest tribute to Jimi was to come in his next record, Live/Evil.

in 1971, Miles Davis released his album, Live/Evil. Maybe the most astonishing track, Sivad, was the scene in which Davis picked up his trumpet and, aided by wah-wah, invoked the spirit of Hendrix with a solo that is captured in this first track on Live/Evil.

Clocking in at over two hours and ten minutes, four of the songs are live performances and four are studio recordings (and presumably the evil portion). Despite its length, it fascinates for its entire duration, if only for being so unconventional.

During the electric period, Davis experimented at a break-neck pace with styles, instruments and personnel, melding elements of rock and roll, funk and avant-garde with jazz and blues.

He exchanged pianos and stand-up basses for electric keyboards and rock-style bass guitars. He imported sitars and tablas from India, drums from Brazil and rhythms from Africa. By the time of his concert at Carnegie Hall in March of 1974 (as documented on the album, Dark Magus), his band featured not one, not two, but three electric guitarists, all playing at once, performing a hellacious din that has been described as heavy metal jazz.

Jazz critics mostly didn’t get it, expressing first disappointment, then disapproval and finally horror. To them, the sullying of jazz with these other genres was an unforgivable sacrilege. He shared the stage with the biggest rock and roll stars of the era and gained his greatest commercial success. The music he left us remains uncategorizable.

Fusion is the label often given to this music, but Davis was not fond of such terms. In a Rolling Stone interview published in December, 1969, he said: I don’t like the word rock and roll and all that shit. Jazz is an Uncle Tom word. It’s a white folks word. I never heard that shit until I read it in a magazine.

Upon its release, though Live/Evil was well-received by many popular music critics (who were clearly more open-minded than their jazz counterparts), it didn’t make the same impression as wildly popular (for a jazz record) Bitches Brew.

Live-Evil was the first recording to feature Davis playing his trumpet through a wah-wah pedal. How did that come to be? Says Davis, in his autobiography: By now I was using the wah-wah on my trumpet all the time so I could get closer to that voice Jimi had when he used a wah-wah on his guitar. I had always played trumpet like a guitar and the wah-wah just made the sound closer.

Jimi, of course, was Jimi Hendrix, who was an explicit influence on the music of Davis’ electric period. Davis relates: The music I was really listening to in 1968 was James Brown, the great guitar player Jimi Hendrix, and a new group… Sly and the Family Stone, led by Sly Stewart from San Francisco. The shit he was doing was badder than a motherfucker, had all kinds of funk shit up in it. But it was Jimi Hendrix that I first got into when Betty Mabry turned me on to him.

The two met in 1969 and jammed together. Said Davis: Jimi Hendrix came from the blues, like me. We understood each other right away because of that. He was a great blues guitarist.

As it was, Davis lifted musical elements from Hendrix’s oeuvre and repurposed them in his own.

As detailed by Bob Belden, a producer, composer, bandleader and Miles Davis scholar: Jimi’s music – particularly the bass lines – directly influenced Miles Davis. If you listen to ‘Inamorata’ from ‘Live/Evil,’ that’s the bass line to ‘Fire.’ ‘Mademoiselle Mabry’ from ‘Filles de Kilamanjaro’ is derived from Jimi’s ‘The Wind Cries Mary’; ‘What I Say’ from ‘Live/Evil’ is basically ‘Message to Love from ‘Band of Gypsies,’ and so on.

Davis’ borrowing from Hendrix didn’t stop at music. He imitated Hendrix’s wardrobe, seeking out the stores where he bought his clothes, and went so far as to hire Hendrix’s hairdresser, James Finney, who accompanied him on tour.

That was in September, 1970. Two months later, Davis played a set of four shows at the Cellar Door, a small club in Washington, DC, that held less than 200 people. The live material on Live/Evil, including most of the song, Sivad, is culled from these sets.

Guitarist John McLaughlin put the shows in their historical context, saying that there’s a great sense of vitality in the music, and freedom also. Don’t forget that 1970 was a very volatile time in the United States with the Civil Rights Movement, the Black Panthers and the strong anti-war movement. Miles’ music reflected the social upheaval.

Live/Evil‘s final track, Inamorata and Narration by Conrad Roberts, at a monstrous 26+ minutes, is one of the album’s “epic funk battlefields” (Faust), and features two of the most incongruous edits on the album. The first is at 23:09, where the jam is suddenly interrupted for a recitation of poetry by actor Conrad Roberts. Then, at 23:54, the music kicks back in, but the sound is now muffled, very lo-fi. I read a review where the critic panned this effect, but he obviously didn’t know what you have to do to really enjoy this section, which is to play it loud, very loud; just this side of wherever your speakers will distort. Then it totally makes sense: it is pure, unabashed irreverence in a highly distilled form – a brazen, thudding, squealing stomp. Despite all the musical innovation since, from metal to punk, this clip is still insane for its sheer power and impudence. Davis is channeling Hendrix again, and his final notes are virtually indistinguishable from guitar feedback.

You can check it out for yourself here, with this clip of the last 3:45 of the track:

But let’s not forget about the “evil” in Live/Evil. Three short tracks were written by a Hermeto Pascoal, a Brazilian composer and multi-instrumentalist, who also performs on the recordings. A sharper contrast would be hard to find between the often percussive and bombastic live excerpts and these small, intimate performances, none of which feature a single solo. They give the listener a chance to catch their breath between aural assaults except that they deliver their own legitimate challenge: to hush oneself to catch and soak up the delicate subtleties interplaying.

After Miles’ explorations into rock rhythms, music free of rules and theory, and travels as far from his acoustic jazz roots as one might imagine, he succumbed to the lifestyle of his newfound superstardom. During his 5 year retirement period, Miles suffered from severe physical and mental pain, and probably just plain battle fatigue. Miles had created, and changed music so much over a 30 year period, he was probably just burnt out. Upon his return to music, Miles released The Man With The Horn and a live set, We Want Miles. He was back with a vengeance, with new music, new styles, and a new lease on life. Rock-oriented in nature, the music fuses 1980s pop with improvisational funk and fusion styles. The album marked Davis’s return to his more traditional trumpet playing, although the title song The Man with the Horn features wah-wah improvisation along with vocals.

In 1985, he appeared with his newest incarnation of what he considered the greatest rock band in the world. This band included Miles trumpet, keyboards, along with:
Bob Berg:tenor/soprano saxophone
John Scofield:guitar
Robert Irving III:synthesizer
Darryl Jones:electric bass
Vincent Wilburn:drums
Steve Thornton:percussion