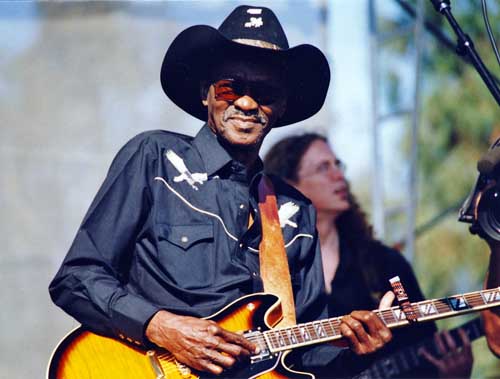 For more of Gatemouth’s music, select the image above.

Little Milton and host of The !!!! Beat Bill Hoss Allen announce Clarence Gatemouth Brown for a jumpin’ on air performance of his instrumental Okie Dokie Stomp.

Gatemouth Brown plays the Okie Dokie Stomp on a Rickenbacker guitar for the 1966 television show The !!!! Beat. At the time he was leader of the show’s house band.

Clarence Gatemouth Brown moved to Nashville, Tennessee at the beginning of the 1960s to participate in a syndicated R&B television show, and while he was there recorded several country singles. He struck up a friendship with Roy Clark and made several appearances on the television show Hee Haw. In 1966, Brown became the musical director for the house band on the short-lived television program, The !!!! Beat.

Clarence “Gatemouth” Brown (April 18, 1924 – September 10, 2005) was an American musician from Louisiana and Texas. He is best known for his work as a blues musician, but embraced other styles of music, having “spent his career fighting purism by synthesizing old blues, country, jazz, Cajun music and R&B styles”. His work also encompasses rock and roll, rock music, folk, electric blues, and Texas blues

In September 2004, Brown was diagnosed with lung cancer. Already suffering from emphysema and heart disease, he and his doctors decided to forgo treatment. This greatly affected his musical career. Later his home in Slidell, Louisiana was destroyed by Hurricane Katrina in 2005, and he was evacuated to his childhood home town of Orange, Texas, where he died on September 10, 2005 at the apartment of a niece, at the age of 81. Brown is buried in the Hollywood Cemetery in Orange, Texas. However, flooding caused by Hurricane Ike in September 2008 damaged his grave. His casket was one of dozens that floated out of their burial sites. His grave has since been refurbished and through the estate funds, a very impressive headstone has been erected in his honor. A Texas Historical Commission marker honoring Brown is located next to the flagpole at Hollywood Cemetery.