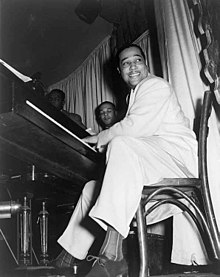 A hauntingly beautiful composition “African Flower” performed by Ellington, solo piano. This composition “African Flower” (aka “Fleurette Africaine”) was composed by Ellington and performed for the first time on the 1962 LP “Money Jungle.” The album was recorded in one day on Monday, September 17, 1962 featured a trio consisting of Duke on piano, Charles Mingus on bass and Max Roach on drums.

Ellington was the elder in the session and apparently there was some friction on the date though accounts of what was behind it vary. Apparently at one point Mingus left the session and Duke had to persuade him to come back and finish. In his Down Beat review of the LP Don DeMicheal gave it five stars and stated: “I’ve never heard Ellington play as he does on this album; Mingus and Roach, especially Mingus, push him so strongly that one can almost hear Ellington show them who’s boss – and he dominates both of them, which is no mean accomplishment.”

Who says creative conflict is a bad thing?